I'm a little behind on posting about Art Quilt Tahoe 2011, which was held Nov 6-11 at Zephyr Point Presbyterian Conference Center located on the south shore of beautiful Lake Tahoe.  This year marks the 5th year that Fabrics Unlimited was selected as the official quilt shop vendor for this fabulous Fiber Artist Retreat.  We got to rub shoulders with sought-after fiber artists Libby Lehman, Jane Dunnewold, Laura Wasilowski, Sue Benner, Rosalie Dace, Velda Newman, Sue Cavanaugh, Valerie Goodwin, and also some of the most talented art quiters around.

The week was filled with cutting, painting, silk screening, fusing, dying, foiling, discharging, thread painting, stitching, and more.  Every lunch and dinner was followed by a presentation from a member of the faculty about their work.  This year marked the 13th year of Art Quilt Tahoe under the leadership of Judy Bernard, and at least one student was in attendance who had been to all of them.  There were familiar faces as well as new students this year.

I was particularly happy to see the return of Sheila Frampton-Cooper from Southern California.  This was her 2nd year at AQT, but those of us who saw her work last year recognized her amazing talent.  Sure enough, Sheila took first place in her division at Houston Quilt Festival this year. No surprise there! I predict you will be seeing alot more of her work in magazines, galleries, and quilt shows. Be sure to check out her website at http://zoombaby.com/. 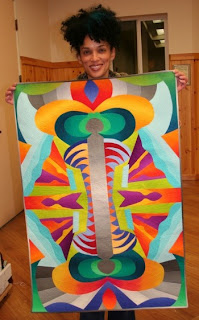 
Tuesday night featured a Champagne Shopping Spree and Chocolate Fantasy at Fabrics Unlimited, complete with a chocolate fountain. Wednesday night presented a challenge competition.  Each class selected a team leader, who selected as many teammates as she wanted.  The challenge was to create a 12" block using 6 of some pretty ugly fabrics they were given and any embellishment technique they wanted to use.  And did I mention that this was timed?  They had an hour to create their masterpiece.The competitors were given a preview of the fabrics they had to use, so there was alot of planning and plotting during the day leading up to the competition.  Eight teams in all, everyone had a great time.  The judges were the employees at the facility so insure no favoritism in judging.  Sue Benner's team was the winning team and received a $250 gift certificate from Fabrics Unlimited. There was also a People's Choice award, which went to Libby Lehman's team. Here are some pictures of the competition.

Thursday afternoon was the "walkabout" where everyone visited all the workshops to see the projects. It's amazing what the students do in a relatively short amount of time. Everyone had a good time, and many registered for AQT 2012 before leaving to go home.

The list of instructors for 2012 is amazing as always...Libby Lehman, Jane Dunnewold, Jane Sassaman, Paula Nadelstern, Velda Newman, Sue Benner, Lenore Crawford, Susan Shie, Katie Pasquini Masopust, Carol Shinn. Go to www.artquilttahoe.com for more info and to sign up. Some of these classes are already filling up, so don't wait too long!

Can't wait until AQT 2012?  Check out our Art Quilt Supplies at www.FabricsUnlimited.net to help you get started with Art Quilting!

Promote Your Page Too